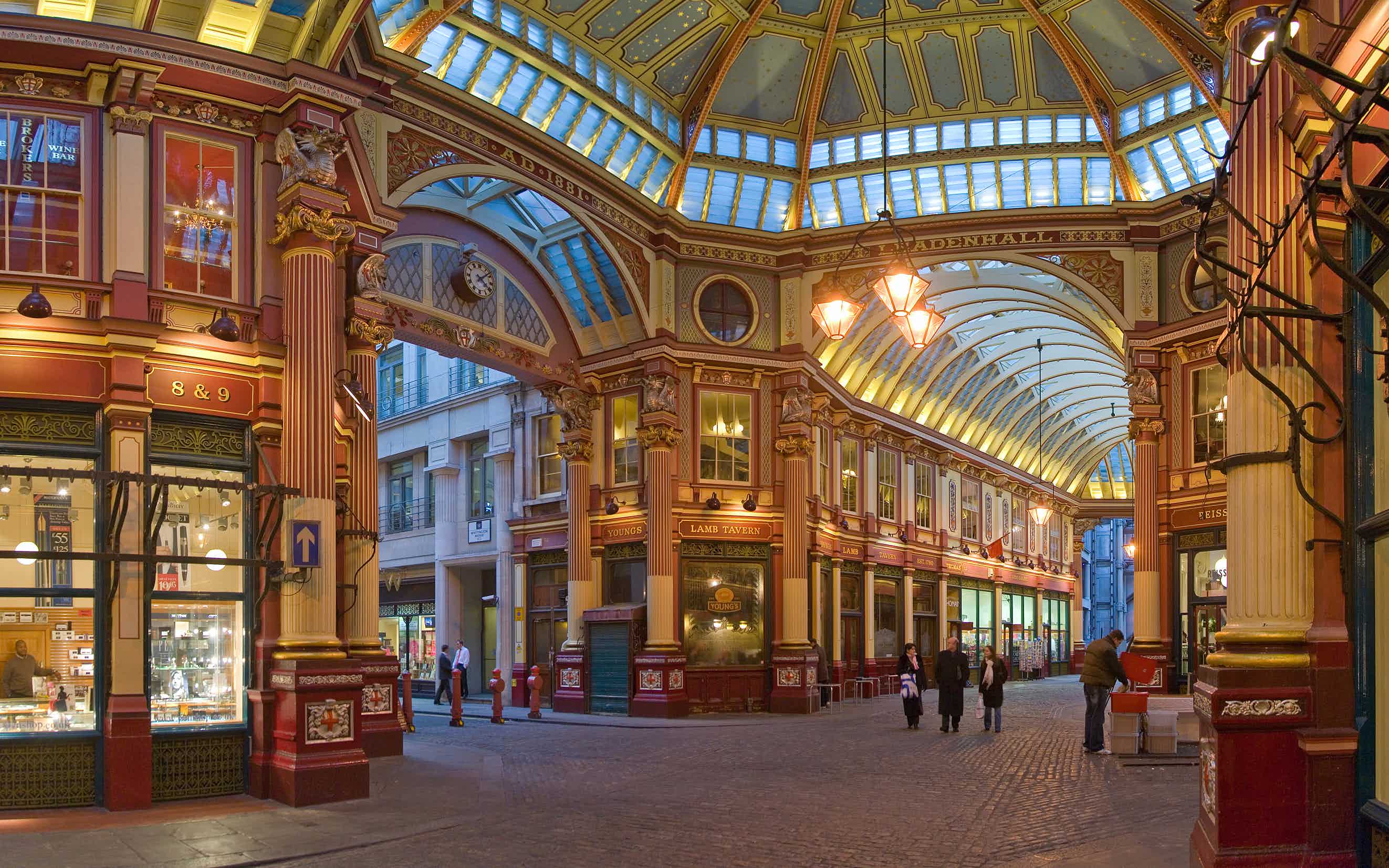 Explore the iconic Warner Bros. Studio and immerse yourself in the magical world of wizards, witches and wonder with the Harry Potter studio tour. Escape the muggle life and go on an enchanting walking tour of the dazzling world of Harry Potter. Walk in the footsteps of wizards and witches, hop aboard the triple-decker Knight Bus and ride in the Flying Ford Anglia from the beloved film series.

Experience first-hand the spellbinding and painstaking artistry of the work of hundreds of artists, designers, technicians and production crew to bring alive the magic of the Wizarding world. Grab your wands and let the Making of Harry Potter Warner Bros. Studio Tour, London cast a spell on you. Explore the magic behind the making of the 8 iconic Harry Potter films. It’s a journey that is bound to enthral wizards and muggles alike.

Here are just a few of the highlights that you will experience on the Harry Potter studio tour:

A wizarding alley lined with restaurants, shops selling telescopes, robes, wands, potion bottles and everything else a wizard and witch requires, Diagon Alley is home to the Gringotts Wizarding Bank, Ollivander’s Wand Shop, Mr. Mulpepper’s Apothecary and Flourish and Blotts bookstore. The original design of the street combined the rich details from the Harry Potter books with inspiration from the streets described in the works of Charles Dickens.

The Diagon Alley set features intricately detailed props, set decorations and underwent significant changes throughout the making of the film series. Buildings have been shifted, walls been broken down and shopfronts moved to accommodate the changes in the storyline. The set pieces were re-dressed for ‘Harry Potter and the Prisoner of Azkaban’ to be showcased as the village Hogsmeade.

Head on over to the dusty old Ollivander’s Wand Shop to see where Harry chose his first wand, or go to the Gringotts Wizarding Bank where Harry had his first encounter with goblins.

The only part of the tour that features a guide, the Great Hall served as the backdrop for some of the most unforgettable scenes throughout the Harry Potter film series, including the Sorting ceremony, the Yule Ball, the end of the Second Wizarding War, the Christmas and Hallowe’en feasts and more. The main area where all the students and teachers congregated, the Great Hall is featured in 7 of the 8 films in the series.

The Great Hall features stunningly handcrafted props, like the House Points Counter,  Professor Dumbledore’s Lectern, the teacher’s table and costumes from students belonging to each Hogwarts house. You will be accompanied by a professional tour guide to take you through this expansive and richly detailed space.

If you are headed to the Harry Potter studio tour between the 9th and 11th of December, 2019, you can even feast on a special two-course Christmas dinner held at the Great Hall. Watch as the set transforms to keep up with the festive spirit.

Whether you choose to gawk at the massive wooden doors entrance or marvel at the glittering goblets, the magnitude and breathtakingly minute detailing of the Great Hall is something to behold.

All aboard the Hogwarts Express! Platform 9 ¾ has taken thousands of wizards and witches from the muggle world to the magical world of Hogwarts School of Witchcraft and Wizardry. Although many of the scenes of Platform 9 ¾ were shot on location at The King’s Cross Station, a portion of the station platform was recreated and restyled at Leavesden for Harry Potter and the Deathly Hallows - Part 2. The Hogwarts Express was the backdrop for the very shot ever filmed for Harry Potter and the Philosopher’s Stone and was also the very last shot of the entire series in Harry Potter and the Deathly Hallows – Part 2.

Home to dozens of magical creatures including unicorns, hippogriffs and centaurs, the Forbidden Forest is a patch of an untamed forest that is mostly under the care of Rubeus Hagrid. Hagrid’ Hut is located at the edge of the Forbidden Forest. The set is featured in the first, second and final instalment of the series and is adorned with 19 trees with a diameter of over 12 feet each.

Spread across 6500 square feet, the Gringotts Wizarding Bank expansion is one of the newest and biggest attractions of the studio tour. Designed and built by the original crew members, including BAFTA and Oscar-winning production designer Stuart Craig, Pierre Bohanna and more, the set features painstakingly created props and costumes.

Enter the Lestrange vault, which houses the Sword of Gryffindor, Helga Hufflepuff’s cup and over 38,000 pieces of prop treasures, including all Bellatrix Lestrange’s treasures. Walk through the gallery of goblins, where you can get a glimpse of the costumes and prosthetics worn by Bogrod and Griphook, among others. Traverse across the expansive grand banking hall and marvel at the stunning crystal chandeliers, galleons, sickles, knuts, quills, inkwells and more props constructed for the film series. Over 210,000 coins were created for the Deathly Hallows films alone.

As the only bank in the wizarding world, Gringotts Wizarding Bank played a significant role in the Harry Potter film series, with scenes of Harry, Ron and Hermione on a quest to find the Horcrux while escaping from the Ukrainian Ironbelly Dragon being filmed here.

Uncover the enthralling secrets behind over 25,000 unique items of clothing that were created during the making of the Harry Potter franchise. Get a chance to wear your house colors in an original Hogwarts robe that appeared in the film series. The secrets you uncover vary depending on the time and season that you visit as the costumes displayed change to complement the season or feature running at the time. Click here for more information on the tour.

Get a glimpse of the fabled polyjuice potion and the unique props kept within the 950 potion jars at the Potions Classroom. These props include shrunken heads, baked animal bones, dried leaves, herbs and many more handmade items made by the props department. Each jar has been individually labeled and hand-designed by the Graphic Design duo MinaLima.

Glance at the numerous portraits and gaze in awe at the level of painstaking detailing on display at Professor Dumbledore’s office. Take a peek at the over 900 hand-designed memory vials created for his memory cabinet.

Meet Buckbeak and marvel at its three life-size animatronic versions on the tour. Each feather has been individually inserted carefully to look realistic. The talented artists and technicians consulted with physiologists and veterinarians to make Buckbeak’s wings, legs and proportions as accurate as possible.

If you are up for a hair-raising experience, face your fears and get up close with Aragog. Each of its hairs has been carefully inserted individually by hand. With a leg span of over 18 feet, it took 15 people to control the animatronic Aragog on set.

Measuring at 30 feet long and featuring jaws that are 3 feet deep, the Basilisk is an imposing and formidable sight to encounter. Marvel at the astonishing craftsmanship of the talented technicians, designers and artists that brought this creature to life using a combination of practical and visual effects.

You’ll also witness a 1:24 scale model of the Hogwarts Castle that has been intricately detailed down to the last bit. Other sets include a peek at Privet Drive, the Gryffindor common room, Hagrid’s Hut, the Potions classroom, and Professor Umbridge's office at the Ministry of Magic. Take a peek at the hundreds of thousands of props, movie memorabilia, costumes, sets and more that were used to bring the magical world of Harry Potter to life.

Gift yourself and your fellow Potterheads the best official merchandise, souvenirs, memorabilia and more that the world of Harry Potter has to offer. Head on over to the Forbidden Forest shop, Studio Shop or the Railway shop to purchase exciting gifts that thrill muggles and witches and wizards alike. 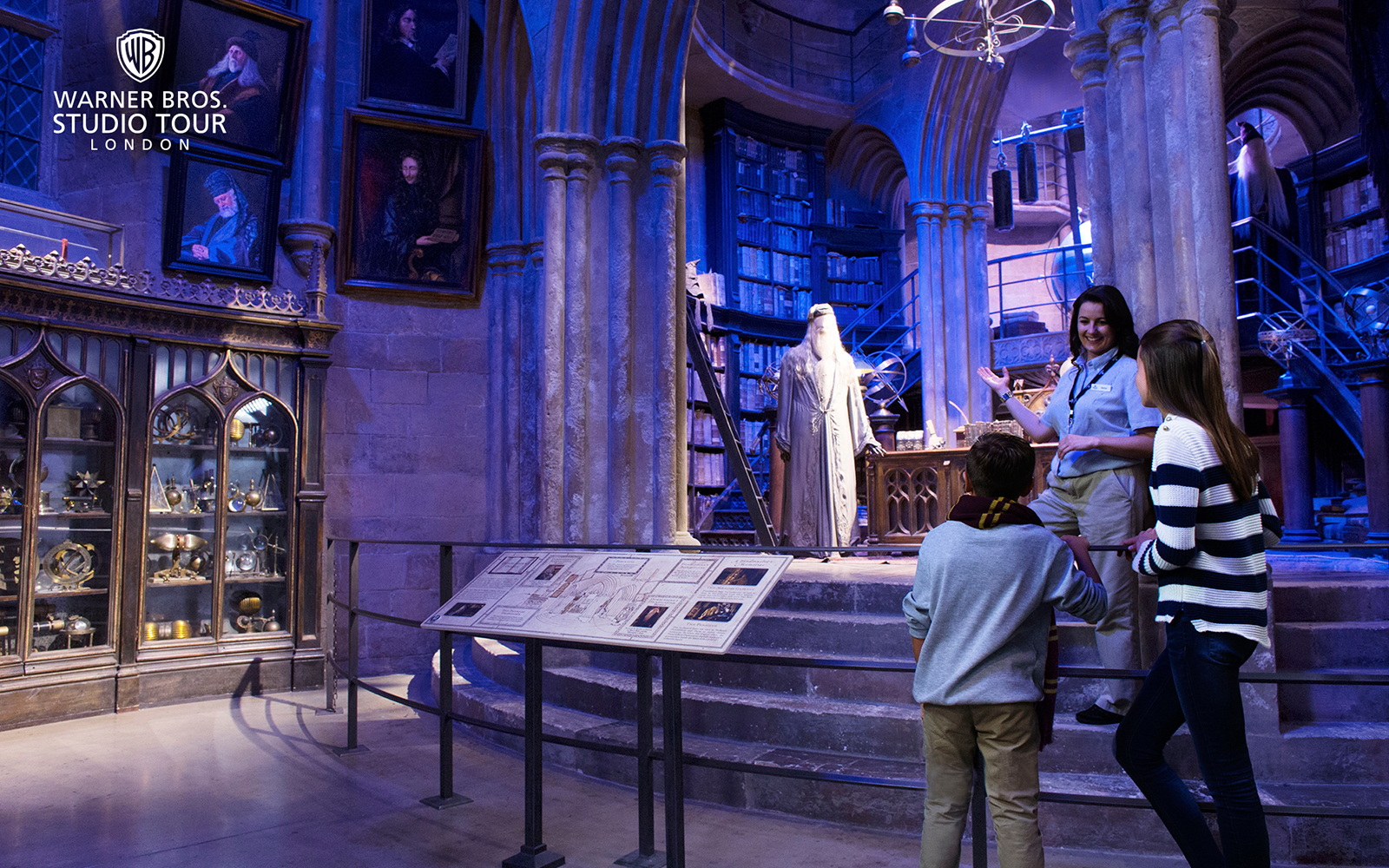 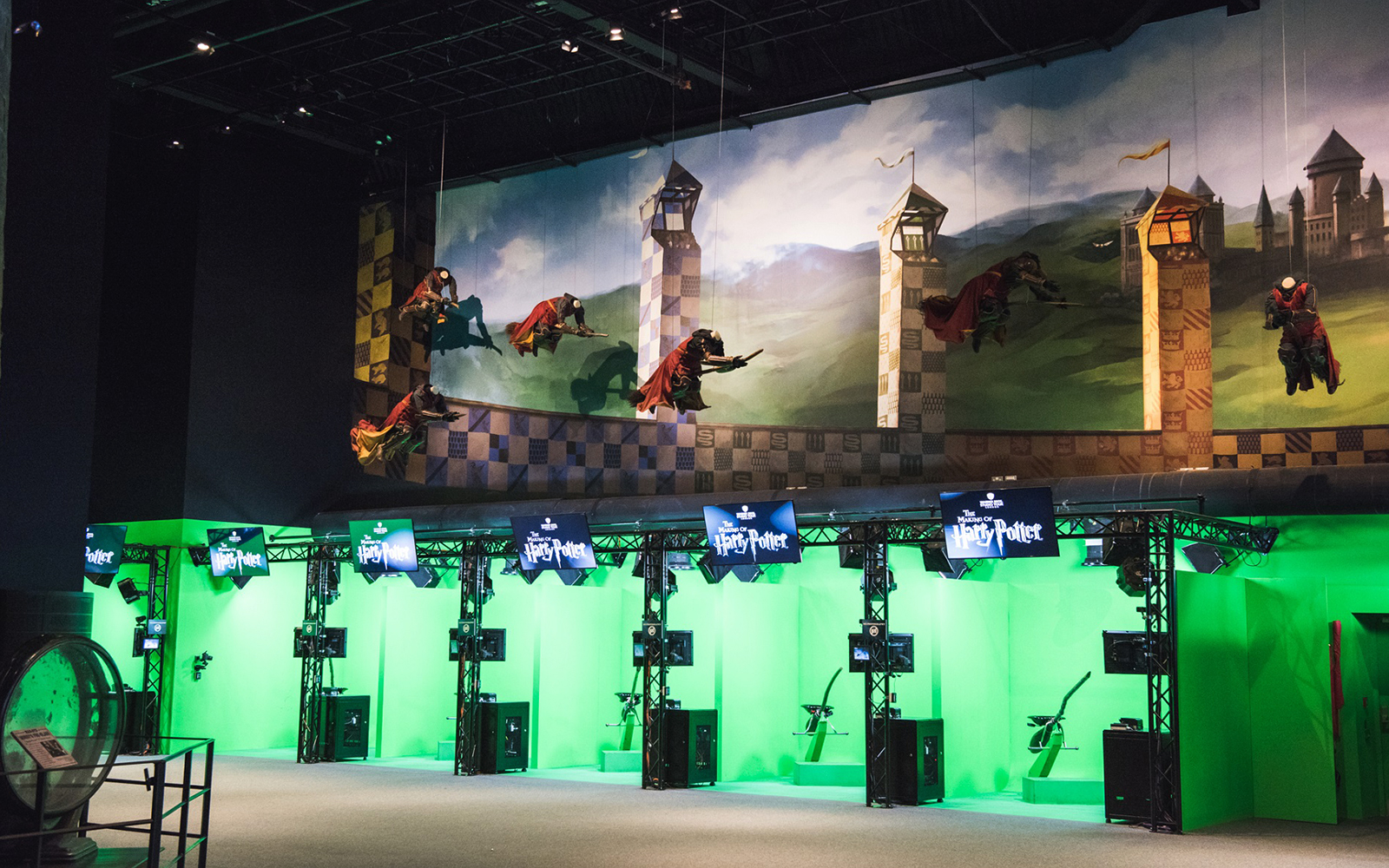 PLAN YOUR VISITGetting There, Timings, Know Before You Go 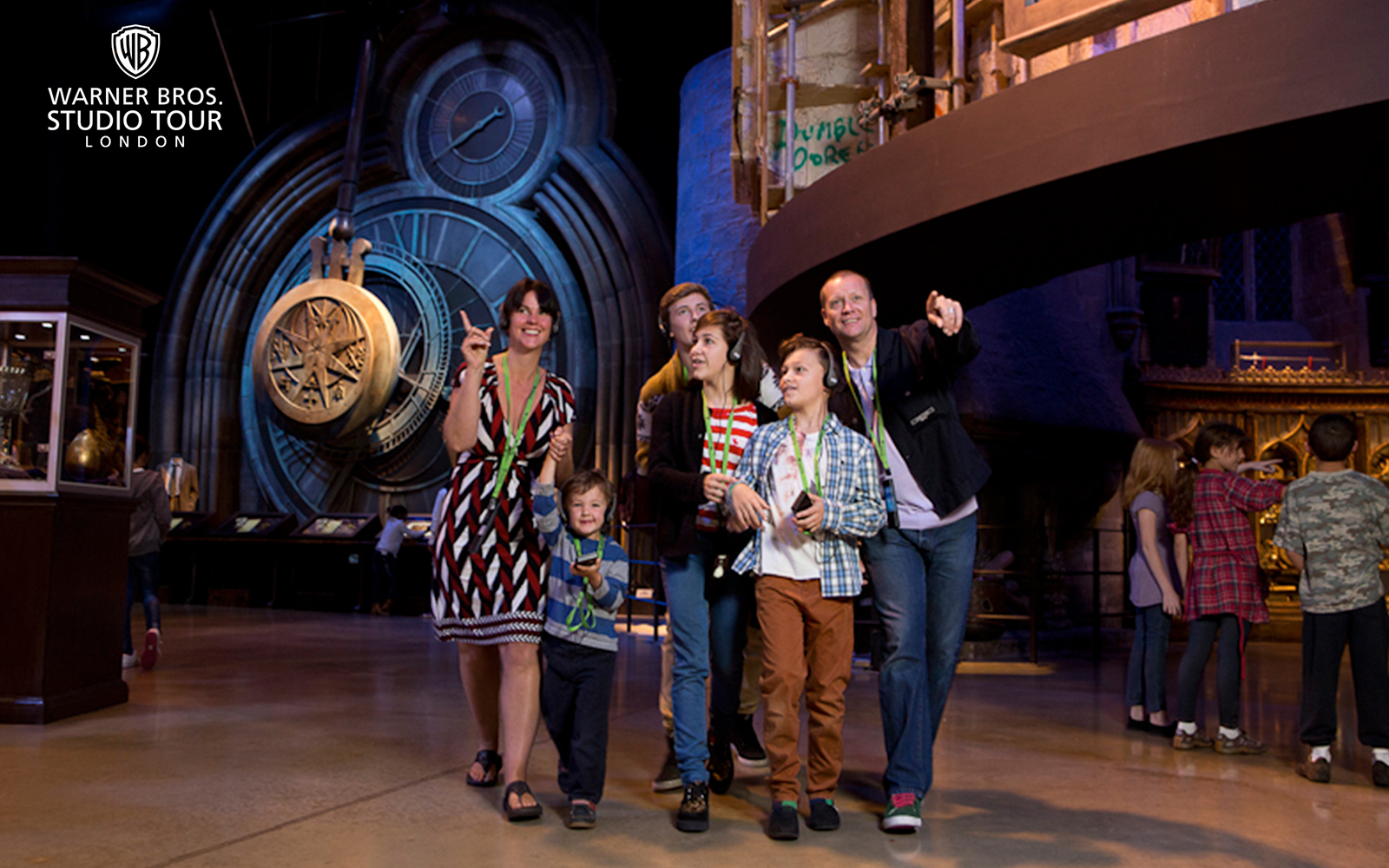